Writer's Block? Step Into My Shower

Does this sound familiar? You’ve placed one of your characters (let’s call her Jenny) in a pretty sticky situation, and now you have no idea how to get her out of that pickle. You’ve tried several scenarios, but none of them quite works. Finally, you decide to take a break, clear your mind a bit. You’re thinking grab a quick shower, drive over to Starbucks for a latte, then come back and get to work on saving Jenny. Five minutes later, you’re halfway into that shower, and suddenly, it hits you, the perfect way to extricate Jenny from that sticky situation.

That sort of thing has happened to me often enough that, at some point, I began to wonder about the possibility of a connection between water and creativity. So, of course, I Googled it, and I quickly learned that there is a veritable waterfall of information on this topic. Yeah, I know. Waterfall of info on water. I couldn’t resist it. No more, I promise. Anyway, I discovered that there does, indeed, appear to be a connection, although it’s not the water per se, but rather a progression of events in which water is just one part. With apologies to Mr. Metcalf, my high school science teacher, I’ll do my best to walk you through the process. It involves dopamine, and one of the few things I still remember from Mr. Metcalf’s class is that dopamine equals good. Apparently, dopamine aids in the creative process (no idea; I got a C- in science), but to get the dopamine released into our brains, we first need to be doing something relaxing, like taking that warm shower or a long walk or a leisurely drive in the country. During these types of activities, your mind is distracted from whatever subject you’ve been concentrating on all day (for instance, poor Jenny), which allows your brain to relax at the same time it’s being flooded with dopamine, and before your know it, genius hits.

Okay, there you have it. Maybe not the most scientific explanation of the process (again, C-), but it gives you the general idea. Relaxation plus distraction plus dopamine equal problem solved. So the next time you’re sitting there staring at that blank page, take a hike. 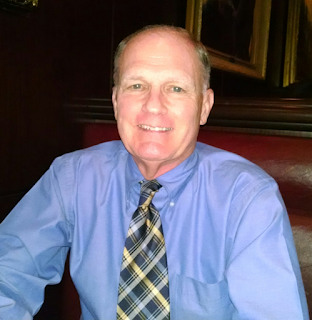 Both my parents were readers. I'm talking stacks-of-books-on-their-nightstands readers. So it's no surprise that at an early age, I, too, became an avid reader. Everything from sports books (especially baseball) to Nancy Drew to the Hardy Boys to almost anything about distant and exotic places.

Although I've always enjoyed putting words on paper, the writer in me didn't fully emerge until I retired after three decades of teaching high school English. I quickly wrote two books aimed at middle school readers, at which point my wife urged me to try a novel for adults. As is usually the case, Cynthia's idea was a good one.

Over the next few years, I wrote several books about Pittsburgh private eye Jeremy Barnes. I took a brief hiatus from the detective genre to write Small Talk and The Backup Husband. Now I’m back and I just released my first Jeremy Barnes novel, Hard Court, on April 11.

In our spare time, Cynthia and I enjoy reading (of course), going to live theater productions, watching reruns of favorite TV shows such as "Sports Night" and "Gilmore Girls," and traveling to some of those distant and exotic places I used to read about as a child. So far, we've been fortunate enough to walk in the sands of Waikiki, swim in the warm waters of the South Pacific and share a romantic dinner in Paris.

I love interacting with my readers and getting their input on my characters and stories. Please feel free to contact me via my website. 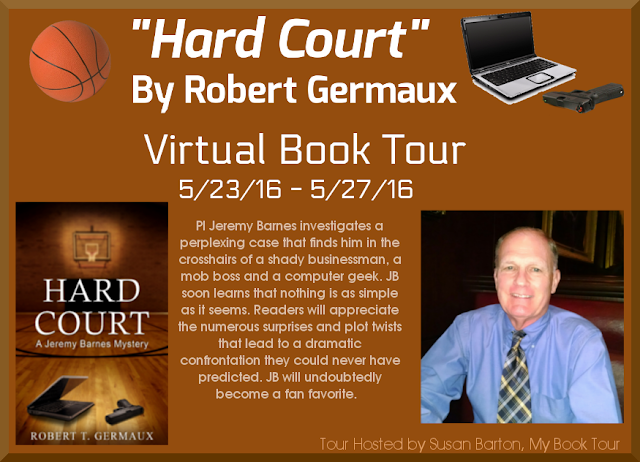 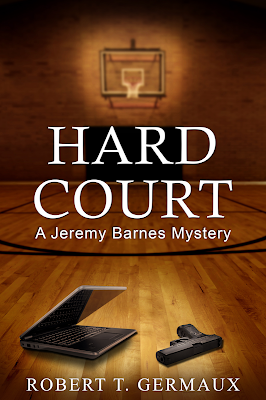 Miles Bradshaw, the dot-com billionaire owner of Pittsburgh’s first NBA franchise, hires private detective Jeremy Barnes to look into what appears to be a simple case of harassment of one of the team’s players. But when Jeremy (JB to his friends) begins his investigation, the case proves to be anything but simple, eventually involving a local businessman with suspected criminal ties, a major FBI task force, a computer geek in California and a mob boss in Erie. Along the way, JB, who can quote Shakespeare as quickly and easily as he can land a solid left jab, uses his wits and his ever-present sense of humor to wend his way through a cast of characters who range from the ridiculously inept to the ruthlessly lethal.

As Hard Court unfolds, there are numerous surprises and plot twists, culminating in a dramatic confrontation that neither JB nor the reader could have predicted.