Where it all began...

Pursued by the Playboy was my debut book. It began as an experiment to see if I could write a contemporary romance that was true to life--only better.  Along the way, it turned into a labor of love.


After completing a few more books, I recently revisited Kate and Marc’s story. With fresh eyes, I tightened, polished, and re-released it, along with a boxed set containing the entire Doctors of Rittenhouse Square trilogy.  Though the characters do overlap, each book is a self-contained story with its own beginning, middle, and end--and, of course, a happily-ever-after.

For those of you who enjoy reading about smart women and sexy men, I encourage you to pour your favorite beverage, pull up a comfy chair, and see where the journey began.  Happy reading! 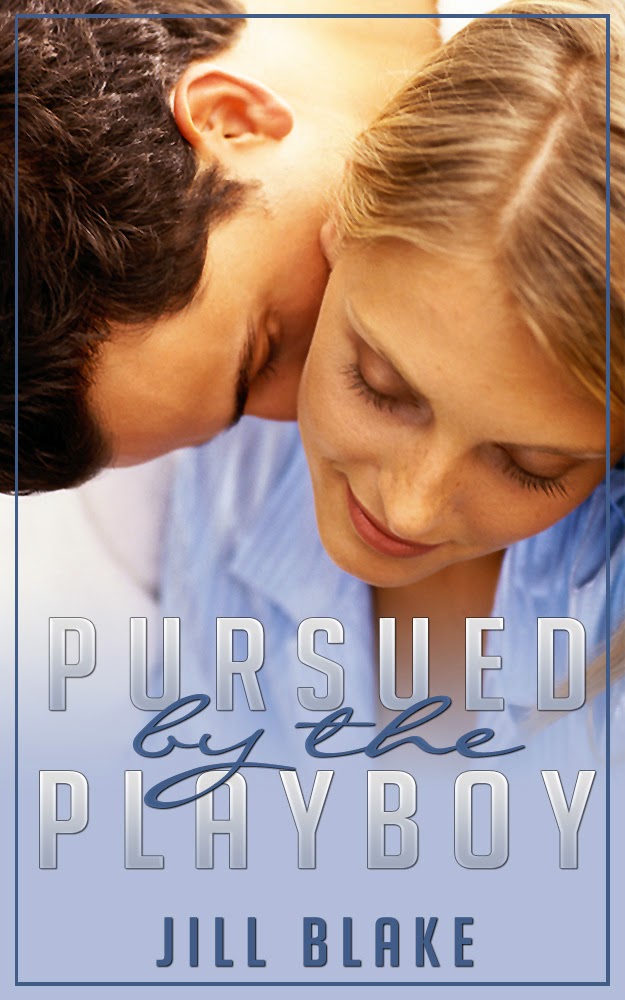 Kate Warner isn't interested in romance. After years of bearing silent witness to the disaster zone of her parents' marriage, the last thing Kate wants is a husband and kids. Besides, she's on the fast track to academic success at an Ivy League university.

Enter Dr. Marc DiStefano, star of the university hospital's department of gynecology. Tired of the Barbie-doll wanna-be's of his past, he's looking to settle down. And he's set his sights on Kate.

...That's when the problems begin.

Excerpt from Pursued by the Playboy:


Marc wondered what it would take to get her to lose her cool. Unable to help himself, he leaned forward and smiled. “You don’t think it’s possible, do you? Combining work and family?”

“Maybe for some,” she conceded. “But you can’t expect to rise to the top of your field if you’re always getting distracted by what’s going on at home. You either have to focus on work or on family. Trying to do both means you’re constantly torn and everyone ends up suffering.”

“That’s a pretty cynical attitude. Especially for a woman.” He raised his hands, palms out. “Sorry, no offense. But don’t you want kids?”


“No.” Her sharp tone took him by surprise. She took a breath, then continued in a calmer voice. “I wouldn’t have gone into academe if I’d wanted kids. You know the odds of actually making tenure if you take time off for maternity leave or because your kid has a sniffle or daycare is closed for the gazillionth obscure holiday of the year? There’s a reason these hallowed university walls are lined with photos of men. They have stay-at-home wives to take care of the domestic life. If I could get a stay-at-home wife, I would too.” She unclenched her fingers and raised her water glass. “Pity I’m not into women.”

The off-color remark startled a laugh out of him. “Where does the cowboy fit in?”

“The one you were with at the gala.”

“You mean Jake? We’ve known each other for ages. His family sort of adopted me in college.”

His eyes narrowed as he tried to gauge what she wasn’t saying. “So I won’t have to ask him to step outside?”

“Step outside? What is this, the 1880s? The ‘my gun is bigger than yours’ approach?” She shook her head. “Whom I choose to spend time with is exactly that: my choice.”

“I see. Well, in that case, thank you for choosing to have lunch with me.”

Pursued by the Playboy
Available now on Amazon

Full disclosure:  I am actually an East Coast gal, transplanted to sunny Southern California. But after over a decade of living, working, and raising my children here, I feel sufficiently well-versed in local culture to offer this insider's guide to Santa Monica. The fact is, most of the people I've met here are not native to L.A., but rather transplants like me who relocated in search of better weather and opportunity.

So, for those of you who plan to visit Santa Monica and want the 411 on this marvelous little enclave on the Westside of Los Angeles, here goes... 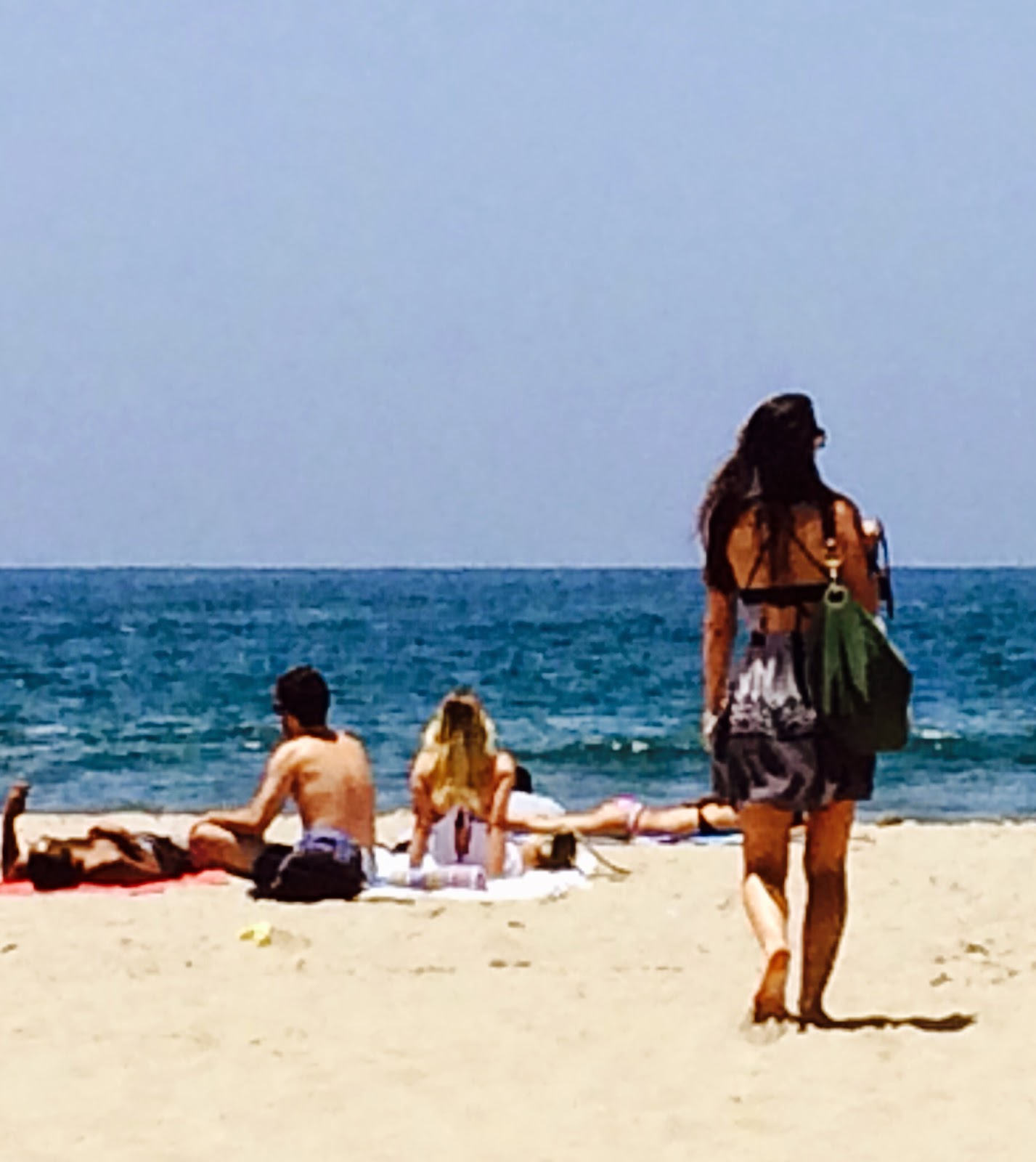 Casual chic. Short sleeves, shorts or jeans, and don’t forget the sunglasses. We’ve got 310 sunny days a year. Except in the mornings. May, June, and part of July brings a morning mist off the ocean fondly known as “June Gloom.” Temperatures range from 60 to the low 70s Fahrenheit during the day, rarely going above 80-something even in the summer. Don’t forget your jacket at night! Thanks to the cold ocean waters, night temps can get as low as 50 degrees F. 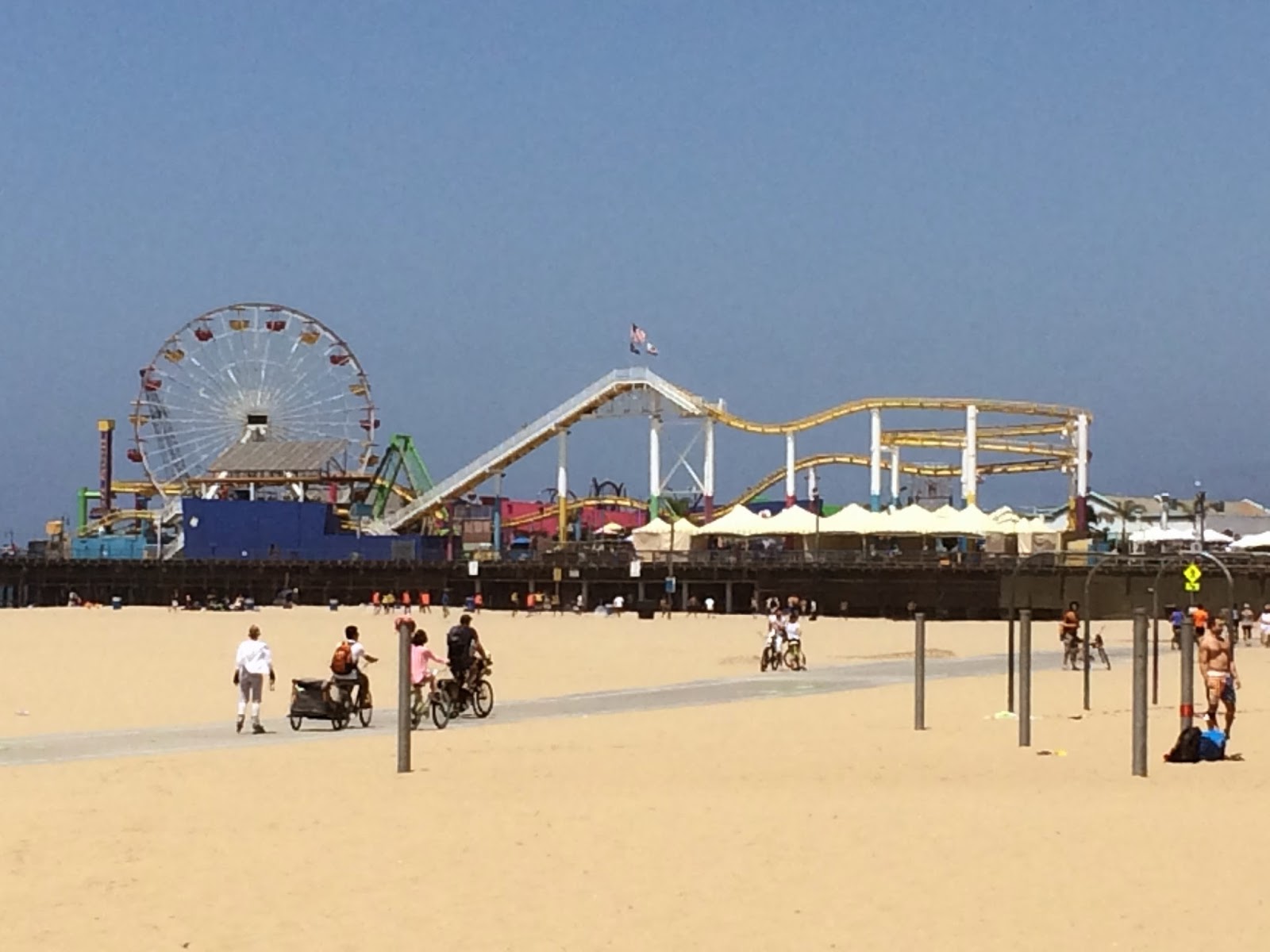 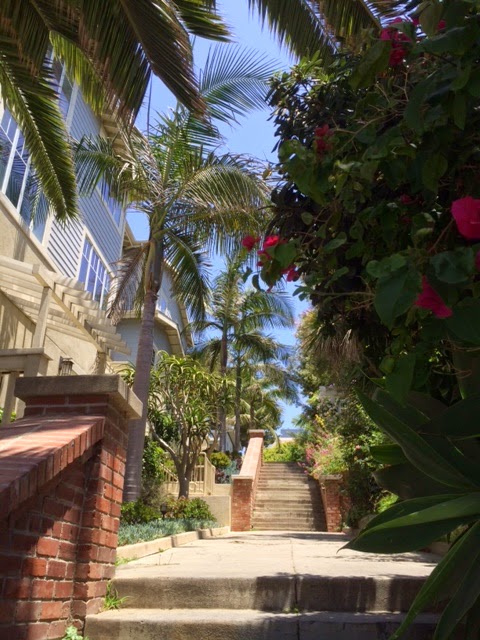 Thanks to its proximity to the beach, and its year-round temperate climate, Santa Monica has a “skin culture” mentality. Everyone exercises. (And if they don’t, they lie about it.) We’ve got the beach for running, walking, roller-blading, playing beach volleyball, and surfing. The entire town is very bike-friendly, with bike paths running along the beach, and on the surface streets (look for the fresh green paint!).

There are also the Santa Monica Stairs – several steep sets of stairs that attract both locals and visitors who want to challenge themselves. The tallest of these, near 4th street, runs 189 steps. And yes, the views are amazing.

Did I mention the hiking? Will Rogers, Temescal Canyon, Malibu Creek (okay, we’re branching out here, but it’s still the Santa Monica Mountains). 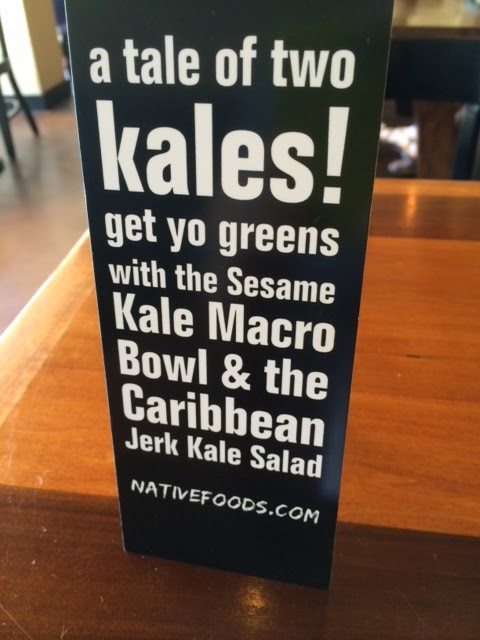 You can get everything from fast food to haute cuisine. Some of my fave’s:

There are three main shopping districts. If you really want to pass for a native, you’ll stick to the first two, since the third is mostly for tourists.

If you're a local, please feel free to add your favorite tips.

Jill Blake lives in Southern California.
Her latest contemporary romance, Without a Net, is set in Santa Monica.